Measles in Samoa, our response 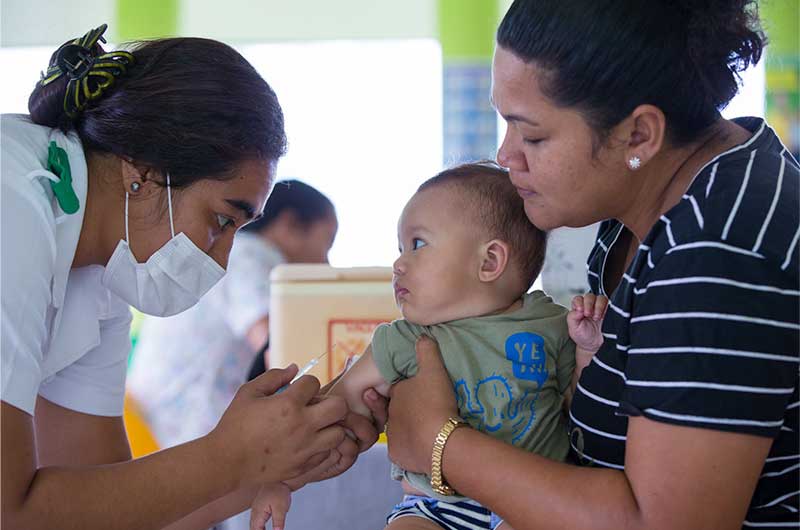 In July 2018, two babies died in Samoa very soon after receiving their measles, mumps, rubella (MMR) vaccine. The Samoan national MMR vaccine programme was subsequently suspended for months while investigation into the cause of the babies deaths was carried out. This was proven to be a result of human error as the nurses mixed the MMR vaccine powder with a muscle relaxant instead of the required sterile water.

Understandably these events shattered parental confidence in the MMR vaccine programme and even when the programme was reinstated many parents declined the MMR vaccine for their children. MMR immunisation coverage dropped to around 31-32%. An immunisation rate of 95% is required to ensure the viruses cannot spread, even if someone brings one of them into a community.

Measles is one of our most infectious diseases and will spread rapidly if introduced into an unvaccinated population. While many perceive it as a minor ‘childhood illness’, as the Samoan crisis has demonstrated, it can be very serious and for some even fatal. Pneumonia is a common cause of these measles deaths and the complications that affect others.

Samoa has a population of about 200,000 and as of mid-December 2019 there were approximately 5,000 measles cases and 72 measles deaths, mainly in children under 5 years old.

Approximately 93% of the population had received MMR vaccine as a result of the mass vaccination programme.

Rotary Give Every Child A Future Response

Rotary Give Every Child A Future (RGECAF), Rotary Australasia’s Centenary project, was developed in consultation with UNICEF to fill identified gaps in immunisation services in the Pacific. It aims to deliver three vaccines across nine Pacific countries, including Samoa, to 100,000 children. Babies will be vaccinated against rotavirus and pneumococcal disease, both significant causes of deaths or disability in very young children, and pre-teen girls against the human papillomavirus, which causes cervical cancer.

UNICEF’s advice was based on the statistics as they stood two or three years ago, when the MMR immunisation rates were believed to be at high levels in the countries concerned. These countries have public health programmes in place to administer MMR vaccines across their populations.

In the last few months, we have seen the tragic outcome of a failure in Samoa to address the decline in their MMR immunisation rates. Thankfully, this is now being reversed through a massive effort to vaccinate the whole population. We expect that this terrible and widely-publicised public health disaster will ensure MMR vaccination rates remain a high priority for all Pacific health authorities from now on, allowing Rotary to remain focused on the original three vaccines of the RGECAF programme.

A positive consequence for RGECAF of the Samoan measles outbreak is that it has reinforced the crucial role vaccines play in saving children’s lives and the importance of maintaining high immunisation rates to protect populations. Rotary and UNICEF hope to be able to build on this positivity when the RGECAF vaccination programme is rolled out in 2020.

In addition, RGECAF will not only provide the three project vaccines but will deliver staff training and improved vaccine storage capacity across the nine Pacific island countries. This will further strengthen their immunisation services and make the delivery of all vaccines, including MMR, even more reliable and safe.

Photo: Wanda holds her six-month-old son Azamat, as he receives a measles vaccination in Leauvaa Village (courtesy of UNICEF).

Your ticket for the: Measles in Samoa, our response

Measles in Samoa, our response